I was on the train home, after a truly grueling week at work, and I just got the urge to listen to some vintage Malmsteen. Thinking back to his time before he broke out, I picked up my iPhone, opened the Spotify app, and searched for Alcatrazz, the band he played in with Graham Bonnett before he broke out. I had a specific album in mind, “Live Sentence”, a live (duh) recording from 1983 or 1984 in Tokyo.

While the initial bits of the lead-off track was blissfully streaming into my earbuds, I reflected on when I first heard Malmsteen. Must have been 1983, and I was browsing around the local Tower Records (Campbell, California), and over the store sound system came this absolutely electrifying guitar playing. My first listen to the “Bach” and Rollers of the nascent “shredding” movement in hard rock. I didn’t know it at the time, but the band was Steeler and while that was what I heard first, it was his work with Alcatrazz that captured my attention. 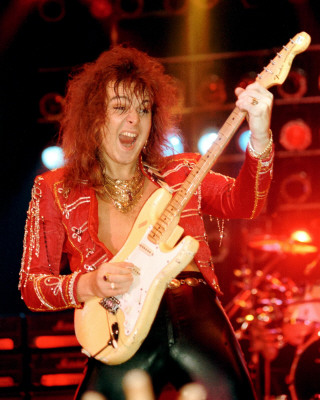 To say it was a game changer is an understatement. Until that time, most of my listening was to either blues based rock, or jazz influenced, very technical progressive rock. Here was loud, in your face, and extremely technically proficient playing. I was just learning to play, and while my skills were very rudimentary, I knew immediately how insane, and revolutionary Malmsteen was.

The first album I bought with Malmsteen as the axe slinger was Live Sentence, in support of their studio album “No Parole from Rock and Roll”. I loved it. Every song, from the opening with “Too Young to Die, too Drunk to Live”, through the chilling “Hiroshima Mon Amor” and the hot interpretation of Boureé in “Coming Bach”.

However, the piece de resistance is the instrumental Evil Eye, that really was the foretelling of Yngwie’s solo or frontman career.

Critical reviews of the album are rife. The mix is lousy, somewhat washed out, and that pains a lot of people. I just don’t care. I was captivated, and inspired.

I went on to learn a lot of guitar, to play many different genres, but my talent skill, and commitment to practice kept me out of the shredder category. That is OK, I still can enjoy, appreciate, and reminisce about some amazingly talented players, all spawned by the young phenom from Sweden who sent us all to the woodshed to work on our chops.

I did eventually buy all the Steeler albums with Malmsteen playing. There are remarkably few, as the band leader, Ron Keel, brought several rising stars, but was lousy at actually producing albums. Alcatrazz was a good launching point for Yngwie’s commercial efforts.