I was late to learning to play a musical instrument, not being subjugated to lessons when I was a tike, but instead developing a desire to learn when I was in high school. I didn’t really have the funds to pursue this until I graduated, but then I got into playing guitar.

Fast forward 33 years or so, and here I am. Recently, I joined a closed Facebook group called “Everything Guitars”, and I enjoy it, but it seems somewhat harsh. That is a topic for another post, as this one had its genesis in a post on this group that asked: “If you could go back to your just starting out self, what would you say?”

An interesting question, and many of the 3 hundred responses were things like “Get into jazz”, or “don’t sell that late 60’s Stratocaster”. I didn’t post on it, because it would have been buried in the long content thread, so I thought I would come here and write about the things I kick myself for whenever I pick up my guitar. So, here goes:

Instead of buying another piece of gear, buy the Tascam Porta–01

Throughout my 20’s, I kept upgrading my guitars, and other gear, buying stomp pedals, new amps, even new guitars. All of this helped, as better gear was more rewarding, and I could hear and feel the improvements in my sound.

In 1986 or so, my guitar teacher, Vern Anderson (not related to me) had borrowed a portable 4 track recorder, to make a demo for his band, Invicta. I thought it was ingenius, using a standard casette tape, it gave you 4 independent channels of recording, and the ability to mix down to a stereo track.

I secretly wanted one. But at the time they were about $600, and every time I had that much money, some new effects, or a better amp, or … won the battle for my dollars.

This was a mistake. Learning early how to pay down tracks, how to play with yourself, how to interleave your melodies would have been huge at that point in my journey. In fact, apart from one party jam session in the early ’oughts, I had never really recorded myself.

Now, I have Garage Band, a good instrument to USB converter, and the ability to wonderful things. And I suck at it. I can play like the dickens when I am just jamming, but as soon as that “red” light turns on, I freeze up, and I ham-hand even those phrases I have long had on autopilot.

It would have been good to work through this 30 years ago.

To my 18 year old self: Buy a 4 track and learn to use it. Screw around, record backwards stuff, get over the “red light freeze”.

Play with a metronome 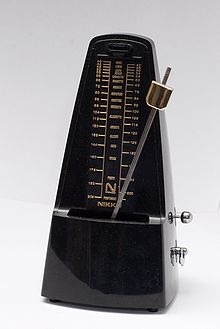 Again, sometime in my 20s I was given a metronome, and apart from toying with it, I never used it.

Perhaps it was because I started late, or because I didn’t start on piano, or on another instrument, or that my instructor was largely self taught, I didn’t pick up the habit. Sure, I played along to records and tapes, and could count off the measures, but I never got in the groove of playing to the clicks.

When I was practicing regularly, this wasn’t so much of a problem, as I could hear when I was out of time, and fix it as I played. Yet, as I got older, and my discipline of practice fell off, I lost that innate timing (and to be honest, it was probably never great), and suddenly I played like I was Carlos Santana where he shifts time signatures during solos – but the difference was, he pulls it off, and I suck.

Of course, now every smartphone can have an app for timing and to be a metronome. Heck, I have a really cool, simple drum machine app that will play a consistent pattern to play to.

You know what? It is hard to do, when you haven’t done it for, well, forever.

Sometime in my late 30’s, I was driving in heavy traffic, and a Joe Satriani tune came on, and I counted beats. Damn, if he wasn’t perfect. That made me feel sloppy, and inadequate. (Well, to be honest, I have always felt inadequate compared to Satch)

To my 18 year old self: Play to a metronome. Later invest in a drum machine, and learn how to use it, and play with it always.

When I took lessons, my instructor would write exercises down in tabulature. Ostensibly, this was because there were multiple ways to play a 440Hz A on a guitar, so tabulature told you the string and the fret. This shorthand was easy to understand, easy for him to write, and it was how I learned.

Today, there are literally millions of tabs available, and virtually all songs that I want to play can be found. But, while good tabs have correct notes, and positions on the fretboard, they miss one thing that is critical, timing.

Further, when I endeavored to learn notation in my 30’s with the excellent Noad books, I made progress, and began to understand. Yet, starting so late, it was difficult, and life intervened, and it fell away. I am now sad.

The side benefit to learning to read music, is that it facilitates learning the foundations of music theory. The irony is that I did learn some of the music theory (circle of fifths, chord construction, transposition, and the like), but without the knowledge of notation, these concepts didn’t stick.

To my 18 year old self: Learn to read music. Stop using the excuse that you didn’t learn to play at 5 years old as a crutch.

When I took lessons, they were an hour a week, and we would spend 30 minutes on the lesson, and the rest on an unstructured jam session. That was my favorite part of the week, and the reason I kept taking lessons long past the time that I had learned what Vern could teach me.

Then in College, I would play with some friends ad hoc, that was fun.

Apart from some sessions in my late 30’s with friends at work, I almost never play with other people. I noodle on my couch watching TV, I plug into my computer and record some things, but I just don’t play out.

I doubt I could have joined or formed a band, but it would have done wonders for my confidence and my skills. Relating to holding time, and interacting with other players would have been much easier had I played out more.

To my 18 year old self: DOn’t be a hermit, find people to play with, and get comfortable. Learn to play different kinds of music (not country, fuck that), and enjoy the experience.

In my 50’s, I have plenty to regret. Yet I still play, despite the arthritis in my hand. I have streamlined my collection of guitars, and while I lust after a Gibson Les Paul, or a Laney amp, I am comfortable with what I have at my fingertips.

I wish I could go back and knock some sense into my younger self, but c’est la vie. Life is a journey, and make it better by playing some Journey.