A poorly kept secret is that I worked my way through college (and after as well) as a chef. Well, I started in my mid-teens as a dishwasher, and rose through the ranks, ultimately being the Chef at a local chain of Italian restaurants. In this time I wen from bistro food, to American classic, to Seafood and Mexican, to time spent in a large kitchen at a country club.

All through that time, I rarely baked. Sure, we had a pastry chef, and there were some fun around making gourmet pizzas, but I never really baked bread.

Since then, I have tried a few times at home, getting some “simple” recipes, and even some dedicated gear, but the results were “meh” at best.

Last spring, we visited my folks in San Diego, and my brother (who had relocated to be nearer to them) made a pretty kick ass boule. It took 2 days, and fermented/rose in his living room, was baked in a dutch oven, and it was heavenly. Thick, chewy crust, good open crumble within, it was delightful. Who could have said that the combination of 4 ingredients (flour, water, salt and yeast) would make so much yumminess.

Since I have an enamel coated dutch oven (an awesome Le Cruset that I bought about 25 years ago) I found a recipe for a no knead bread. It was simple, 630g flour, 18g salt, 1.5g yeast, and about 2.25 cups of water. Mix it up, coarsely to a very wet dough, cover and let it sit for 12 to 18 hours in the kitchen. Then punch it down, give it 3 more ours to rise, and then scoop the very wet dough into a heated dutch oven.

The recipe said that the preheated dutch oven would prevent it from sticking, and 35 minutes at 475F, covered, and 15 minutes uncovered would yield a great bread.

Didn’t work out that way, as it stuck like crazy, but the bread did taste good, even if it was ugly.

I didn’t grab a picture of that loaf, and about 2/3rds of it went in the trash. The bottom was burnt, and the inside was a little undercooked. Still, it sparked a desire to do better…

I knew there were things I could do to improve my loaf, use parchment between the boule and the dutch oven. Additionally, my first attempt I hadn’t slashed the loaf so it didn’t create the attractive marking of the crust. 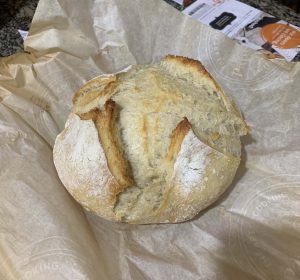 I used a different recipe this time, from the wonderful folks at King Arthur Flour, a no knead crusty loaf recipe. It uses all purpose flour instead of bread flour, and I made 1/2 the recipe. The full recipe makes two 1# loafs, so I had one loaf to bake.

It uses more yeast, and a two stage rise/rest process, 2 hours in the open, and 2 or more hours in the refrigerator.

This dough was a little stiffer, and not as wet as the first batch. Using the parchment paper trick, and my trusty Le Cruset dutch oven, it came out great, as you can see from this picture. The interior of the loaf was perfect, well formed, flavorful, and as you can see the crust was awesome.

Not wanting to give up on the first recipe, I gave it one more attempt. Using my new 6 quart Cambro container to mix the dough, it rose/fermented for over 12 hours. I punched it down, and formed it into a boule, and let it rest for an hour, and then popped it into my pre-heated dutch oven. 35 minutes with the cover on, and then 15 minutes with the top removed. It came out amazing. This morning, I made toast with it for breakfast, yummy.

Still, this dough was a little too wet still, but it came out OK.

Having proper equipment is helpful. Fortunately I bought my Le Cruset dutch oven before they became more than $300.

Unlike general cooking where you can “interpret” the ingredients, adjusting to meet your taste, or to customize the recipe, baking requires discipline. Indeed, depending on the time of the year, and the ambient humidity, there can be a lot of variance in the volumetric measure (Cups, and tablespoons). You really really need a scale to measure your ingredients. It is a lot more repeatable.

Having mixing bowls, and other odds and ends are important. Most people have enough of these, but if not, they are easy to add.

I have bought a few special things. A Lamé – a razor blade holder to slash the dough to get the great looking artifacts on the crust. A Henry-Emile potato dish, a smaller, but more effective dutch oven, recommended by King Arthur Flour.

Two plastic bowl scrapers was a $3 splurge, and very helpful to get stuck on dough out of the mixing bowls.

A monster is born

This is a journey, as I spiral into baking, I have many things to explore. Poolish or Biga based breads, traditional loafs, boules, sourdoughs, and others.

I have a decent oven, and a willingness to explore. I bought a book, “Flour Water Salt Yeast: The Fundamentals of Artisan Bread and Pizza” a fascinating read, by Ken Forkish.

King Arthur Flour has a wealth of information, and very helpful people who often respond to comments with helpful tips. Plenty of great recipes to try.

Now, I am making a sourdough starter, and hope to begin to make a great sourdough loaf.