We have had a long open invitation to visit one of my wife’s friends who retired to San Felipe, Baja California, but the timing never worked out, so we begged off. But with recent life changes, we had no excuse remaining, so last week we visited the Crawford’s in San Felipe.

The trip down was uneventful. We split the drive into two days, stopping in Palm Desert as a good stopping point. The second day, we needed to knock around until our hosts picked us up in El Centro, so we went down by the Salton Sea. I had never been there (or if I had, I was too young to remember) but had flown over it about a million times.

Our first stop was at the visitors center. There was a small gift shop, and information about the Salton Sea, explaining how it was most recently filled (a failed civil engineering accident from the irrigation from the Colorado River in 1908), and how it has become an aviary refuge, an important part of the local ecosystem. Of course, it is a fairly impressive body of water, and well below sea level.

The Salton Sea was a popular get away for the citizens of the Los Angeles basin in the 1950’s, a “Resort Destination“, where people drove down with their boats to enjoy the navigable water. Now, it is largely devoid of crowds. When we were there, a family visiting from Germany was in the visitors center. They were in a motorhome, and were headed to Gila Bend in Arizona (a far more God forsaken place).

The second stop on the trip was at a place called “Bombay Beach”. Apparently, it was a happening spot, lots of partying, and fun, but alas, the sell by date was long gone. On the beach, you can clearly see the pilings where there used to be a night club, and restaurants, ruins of days gone by.

One thing there was this abandoned, decaying boat. An interesting subject for photography, and a chance to play with my Canon EOS 5D with a fixed 50mm, and a polarizing filter.

Driving around the remaining community there, you can see abandoned buildings, un-occupied mobile homes, and even empty lots. Once, it might have been a grand place to live. Now, it looks tired, dilapidated, and headed to oblivion. Trulia pegs the price of a home lot at about $3K. Seems expensive to me. 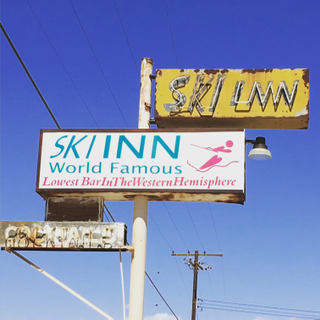 On the way out, you can stop by the lowest bar in North America. It was open (and for sale for $175K). We didn’t stop, but it made for an interesting picture.

From then, we headed south to El Centro, where we were to meet our hosts. We began to go through increasing agriculture, fields of alfalfa, and oats, and communities of Brawley. The heart of the Imperial Valley.

As our hosts were experiencing car trouble, and were limping up from San Felipe, we had some time to kill. As the plans changed and we were to be driving in Mexico, we had to go get some Mexico insurance. Still, we had some time to kill, and we had driven by an old Foster’s Freeze in El Centro, so we stopped and grabbed a tasty treat. They do a good frozen custard and I enjoyed my cone.

The trip into Mexico was event free, quiet, and an easy drive after dark. We finally got to our host’s house about 10:00PM, a little after our expected time.