An old friend, an indoor/outdoor temperature monitoring station, made by Oregon Scientific. I am pretty sure I bought this while I lived in my first Condo in San Jose. An impulse buy on one of my trips to Fry’s Electronics, it has a head unit, and one remote sensor. The remote sensor communicates with the head unit via radio, and it worked quite well. 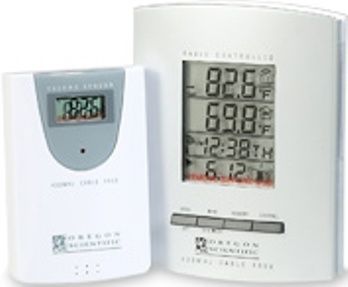 From our move to Arizona, and the sensor being in the extremes of heat, and back to San Jose, again, it has been faithful in its utility. Powered by AA batteries, two each in the head unit and in the remote unit, they had quite good life. At least a year between changes. It also had a built in alarm (why?) and a clock/calendar that was set once a day from the atomic radio clock.

However, as it aged, it had become less reliable. The head unit lost touch with the remote with increasing frequency. No amount of resetting would recover it, but time waiting and it would magically work. Finally, it got to the point where it was too annoying, and while it served its purpose, it was time for a new unit.

We ended up with a La Cross unit, that while missing the atomic clock automation, does seem to have a better remote unit.

I still have a dream of building a real weather station, but for now, this will do.