Growing up in the south bay (the San Francisco Bay Area) we often ate at Mexican restaurants. One of my favorite dishes was, and remains to this day, a hearty green pork chili, called Chili Verde. While there have been many differences in the dish, it is always a green chili pepper of modest heat (Anaheim is milder, and Poblanos make it hotter, but I often use what looks freshest when I shop, even Jalapeños).

The sauce is created with tomatillos, a green tomato like vegetable, that make the sauce creamy, and have body.

Where there is a lot of variance in the making of the dish, I like to thicken the final chili with a light blond roux (butter and flour, in roughly equal proportions, and cooked until is just begins to color) to thicken it. I do this because it makes the final chili have body, and it can be used to fill a Burrito.

Print Recipe
Pork Chili Verde
A classic Mexican Chili, with Pork and Tomatillo sauce that is sure to satisfy. 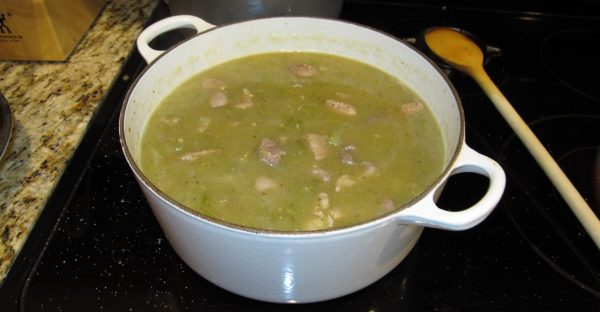 Use a heavy pot for this. I use my 8 quart Le Cruset that I bought probably 25 years ago as a second from the outlet. The enamel coating resists the slight acidity of the chili and makes clean up a snap.

Do not use canned tomatillos. That will make the Baby Jesus cry.

I use La Victoria sauce. When I lived in Arizona, there was a local brand called Macayo that was outstanding.

You can use any fresh green chili, I have used Hatch, Anaheim, Pasilla, Poblano, and Jalapeños with great results. You can also buy the frozen Hatch chili's in the freezer section, and that works well.

If you are concerned about the fat content, you can skim the oils off the top before you thicken it. I don't, because, well, chili isn't a diet food, it is supposed to be a comfort food.

You can use a slow cooker for this. In this case, brown the meat, and cook with the onions and garlic before putting the rest of the ingredients in to the slow cooker. Cook on low, for 8 hours and then thicken at the end in the slow cooker.

You *might* be tempted to cheat and use pork loin, as it is easier to prepare and cube (less fat/gristle and no bones), but I recommend against it. The meat from the shoulder cut is much tastier in this dish. Trust me on this.